There is a tendency, when great and inspirational people die, to reduce them to just that: an inspiration.

But before Mandela was inspiration he was an angry young man, a lawyer, a freedom fighter, a prisoner and it is important to resist the urge to simplify him to an abstract idea of how he effected others. Many world leaders, and journalists have praised this man he held views and behaved in ways that they routinely condemn. Now an idealist might say that people are able to put aside their personal feelings in order to acknowledge the great work done by Mandela but more cynical people might call it disingenuous.

In a sea of journalistic obituaries by people who never met him I am not sure what I have to offer, hence my delay in writing, except maybe the Irish perspective.

As a freedom fighter against a left-over colonial regime in the 70s and 80s, Mandela captured a lot of good-will from the Irish public. A boycott of South African goods as a protest against apartheid was put in place by a number of groups and trade unions.

In 1985, 12 retail workers from Dunne Stores in Dublin went on strike for 2 and half years (July 1985 to April 1987) for the right not to sell South African products while Apartheid was in effect.

“We had made the decision as a company that we couldn’t allow people in the organisation to decide what goods to sell and what not to sell.”

“Ben Dunne was saying he had the right to sell what he wanted to in his store. If Ben Dunne decided to sell stolen property it wouldn’t mean I had to handle it.”

The Irish government would go on to ban the sale of all South African good in Ireland until the end of the Apartheid regime. They officially called for his unconditional release in 1988. Mandela met with some of the strikers when he visited Ireland in 1990 after his release.

When Mandela spoke in Dublin on that visit he thanked the strikers as a source of comfort and inspiration to him during his imprisonment. “For more than a quarter of a century your country has had one of the most energetic and effective anti-apartheid movements in the world. Irishmen and women have given wholehearted and often sacrificial support for our struggle in the fields of economic, cultural and sports relations.”

Because it was a sacrifice to get involved. In the 1980s Ireland was in the grip of an economic depression with unemployment higher than even in the more recent financial crisis. But two of Ireland’s most significant trade partner the UK and America were not in favour of political support for Mandela’s ANC. Margaret Thatcher called them terrorists and the CIA sent money and arms to the apartheid regime. The government ran a risk of retaliation for their strong stance of support.

Not only that but the strikers themselves ran a personal risk and sacrifice of stable employment at a time when emigration from Ireland was very high due to the unemployment epidemic.

“The outstanding Irish poet, William Butler Yeats, has written that too long a sacrifice can make a stone of the heart…We understood that to emulate the barbarity of the tyrant would also transform us into savages. We knew that we would sully and degrade our cause if we allowed that it should, at any stage, borrow anything from the practices of the oppressor. We had to refuse that our long sacrifice should make a stone of our hearts.”

The willingness to sacrifice your own livelihood for what is right is a sentiment that is lost in politics today. Individualistic philosophy, a lazy apathetic amoralism has been a trend that even a new financial crisis could not shake.

Injustice in other countries does not inspire reactions like this again. Despite what I’ve said, I must admit that I feel like waxing lyrically on Mandela as a near spiritual figure. I feel like quoting Yeats’ ‘September 1913’ where he bemoans his own generation and longs for the heroes gone. I’ll try not to give in to the defeatist romanticism just yet.

My earliest memories of my parents and political activism involve my mother suddenly laughing in a supermarket that she could buy South African products again, my father’s copy of Mandela’s autobiography on the shelf, learning to spell boycott with the correct number of Ts. When angry teenage activist me sulked that all politicians were liars and con-men, there was an unspoken “except Mandela” at the back of my brain. So in a strange way I am mourning a man a never met.

But what worries me most is that I look around the world and cannot see anyone on the stature or  with drive and clarity Mandela had. I do believe that the world is not change by leaders but by communities but all the same, leaders with vision and influence can rally people to action in ways a group cannot. The world could use its next Mandela.

Imprisoned Ideas is an online campaign for the purpose of highlighting the cases of academics imprisoned for their work, frequently for human rights advocacy. The group uses Tumblr and Twitter to achieve greater awareness of these cases. But the campaign brought to mind several things I’d been considering about online activism in general.

Social media campaigns comes in various levels of competency and effectiveness but the significance of this campaign is that it directs support towards already existing campaigns on the ground. This incorporates the idea that social change cannot, and does not need to be imported or dropped in on people’s heads but rather emerges from the local context.

Each of the academics highlighted by the campaign has a petition and interest surrounding their arrest already but little support outside the local sphere. Imprisoned Ideas attempts to give a wider audience for these petitions, documentaries and campaigns.

Social media, while frequently used ineffectively or for lip-service activism spawning the phrase slacktivism, has great potential for assisting political and social movements.

For example this campaign could theoretically become a platform to be continuously updated, providing a excellent resource to journalists, activists and interested individuals.

Situations of political prisoners, such as Iranian physics postgraduate student Omid Kokabee or Professor Hadif Rashid al-Owais in the United Arab Emirates, are difficult to get accurate and up to date information, even for their own legal defense, never mind journalists or campaigners outside the country. This is a strategic decision by the governments in question to limit the capacity for international response or discussion. If journalists can’t access information how can they spread it? Twitter has already changed the nature of news reporting. Maybe it could change political behaviour as well.

Ventures like Imprisoned Ideas have the potential to be a platform that brings together grassroots campaigns for around the world and offer them support without taking over or claiming to have better solutions than campaigners on the ground.

It also raises the an idea I’d call “crowd-sourced activism” where the majority of the practical work is done on a local level but those local activists can receive publicity and put out calls for specific action, such as petitions or boycotts, through platforms such as the Imprisoned Ideas Twitter.

Fundraising through crowd sourcing on sites like IndieGogo and Kickstarter have proved the potential for fundraising in this way. That’s how the Veronica Mars movie has been made. If crowdfunding can change the music and film industries than why not political activism? 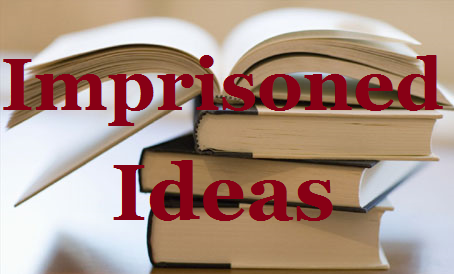